THE DMG IS DAMAGED

You need to allow untrusted applications in your OSX settings.

“GNS3” CAN’T BE OPENED BECAUSE IT IS FROM AN UNIDENTIFIED DEVELOPER.

You need to allow untrusted applications in your OSX settings.

If GNS3 ask you for Update for Universal C Runtime in Windows KB2999226 you need to install it. In theory this is distributed via Windows Update but you can force manual installation:

On Window 7 you need service pack 1.

If you can't install it you need to investigate why Windows Update is no longer working on your system it could be a virus blocking all updates including security updates.

Make sure all the Windows update are installed and your computer as reboot. On Window 7 you need service pack 1. If not working download: http://download.microsoft.com/download/8/5/e/85edb843-93af-4daa-ad1e-c33dfa95b2ea/vc_redist.x64.exe

GNS3 STOP WORKING WHEN I OPEN A FILE

If you have Dell Backup and Recovery (or Alien Respawn for Alienware) you need to uninstall or upgrade it to version >= 1.9.2.8. This software conflict with other application using Qt.

My IOS configuration is not saving#

Like a real hardware you need to save the configuration before the device is powered off. You can do that with write memory command.

This could be due to not enough memory.

This could be an invalid IDLE PC value. Edit your router and fix it.

The free version of VMware doesn’t provide vmrun the command line utility for controlling VMware your need to download it for free from https://www.vmware.com/support/developer/vix-api/

This error mean VMware has failed due to an internal error. But the VMware tools don’t provide informations when something is wrong on his side.

It’s very important to run GNS3 and VMware under the same user.

This issue is often related to a problem with your antivirus / firewall.

See the official answer from VMware:

The player version of VMware have limitation and if your VM are not in the default directory sometimes GNS3 could not found the VM.

This problem doesn’t occur with the paid version of VMware because a central database is available to third parties applications.

Another virtualization software (VMware, Qemu with KVM, Hyper-V...) is already running on your computer and use your CPU hardware virtualization. Only one program can benefits of the hardware acceleration. You need to stop the other program if you want to start VirtualBox.

The following physical network interfaces were not found: vboxnet0#

The default VirtualBox interface network interface are not installed on your system. You can fix that in VirtualBox preference or by reinstalling VirtualBox.

Make sure to read the documentation: https://gns3.com/support/docs/asa-2 And follow the recommendation.

I have trouble with my ASA 8#

Asa 8 is not supported use ASAv instead: https://gns3.com/support/docs/asa-2

KVM acceleration cannot be used (/dev/kvm doesn't exist). You can turn off KVM support in the gns3_server.conf by adding enable_kvm = false to the [Qemu] section#

This mean the remote server where you try to run Qemu doesn’t support KVM (hardware acceleration for Qemu). Read this documentation to enable it if possible: KVM support available: false

To ignore this error in the file ~/.config/GNS3/gns3_server.conf add:

If you see this error the image has crashed. IOU is an experimental technology from Cisco and have no warranty to be stable. The best is to try with a different images.

My IOS configuration is not saving#

Like a real hardware you need to save the configuration before the device is powered off. You can do that with write memory command.

My VPCS configuration is not saving#

Like a real hardware you need to save the configuration before the device is powered off. You can do that with the save command.

GNS3 will communicate between device on random UDP port (you can configure the port range in the configuration file of the server and in the GUI). This mean both server need to be able to communicate directly on this ports check your firewall rules.

When I use a SSH tunnel link is not working#

SSH tunnel is not supported, use a VPN like OpenVPN instead

NAT is not supported, use a VPN like OpenVPN instead

The virtualisation software where the GNS3 VM is running doesn’t support nested virtualization. Many possible reason:

I can’t use KVM on ESXi#

In order to use KVM (hardware acceleration for Qemu VMS) you need to enable the nested virtualization on the GNS3 VM in ESXi. Depending on how you administrate the ESXi it could be a checkbox in your interface or a configuration file to change.

Could not find the default VM directory with VMware player#

A limitation of the free version of VMware player doesn’t allow you to change the default VM directory for third parties applications.

You can fix it by: Editing the file %Appdata%\VMware\preferences.ini And add a line like this:

KVM is not working on VirtualBox#

It’s a limitation of VirtualBox. If you want to use KVM in a VM you need VMware. 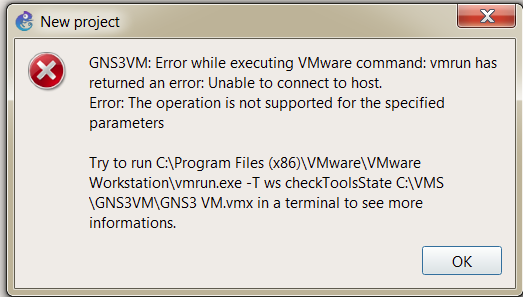 This mean GNS3 try to send a command to VMware but it’s doesn’t work due to an issue with your VMware installation.

I can’t use the cloud on ESXi#

If you are on ESXi by default for security reason you are not allowed to inject raw packet in an interface. You need to enable the promiscuous mode on the interface.

I have issue with a VMnet#

Do not directly use a VMnet in a cloud. Instead use the built in support for VMware (go to preferences / VMware and add the VM).

My cloud doesn’t work on Windows#

Try to replace Winpcap by Npcap: https://github.com/nmap/npcap/releases If you didn’t reboot since GNS3 install you could also try to reboot.

GNS3 is not working in tmux on OSX#

You need to fix your tmux configuration:

You have an old Open SSL installation on your system. This installation take the priority on GNS3 bundled version. You need to upgrade your Open SSL or uinstall it.