GNS3 v2.2.18 introduces a feature to transfer files, for example configurations, between the GNS3 GUI and QEMU VMs. That's done by adding an additional disk image to the VM and implement a way to transfer its data to the user. It is not as convenient to use as the IOS and IOU method, but it is more flexible. It's not limited to configurations and it will work for almost all QEMU node types.

The additional disk image, named config disk, is not active by default. You have to enable it in the HDD tab of the node properties (for a specific node) or the QEMU VM template (for all new nodes of that type).

This adds a FAT formatted image as hard disk D to the node. The user can now transfer data to/from this disk to the VM. There is no automatic transfer into the node's configuration, as for IOS and IOU devices. The config disk is simply a file storage with all its flexibility. The disk size is set to 1 MB, so it can't be used to exchange large files.

The config disk images are not simply exposed to the user, as it's cumbersome to use them. Instead, they are converted to ZIP archives. By right click on a node / Export config the ZIP file is copied to the users computers and can be opened and inspected there. By creating/modifying a ZIP file and importing it, it is copied to the node.

When a node is initially started the config disk is empty. Sometimes it might be useful to fill it with initial contents. The manual way is to import a ZIP archive before the first start of a node. This can be automated by storing the ZIP archive in the GNS3/images/QEMU directory and entering its name in the "Startup-cfg" field of the HDD configuration.

To make this issue less likely in the future, newly created templates will set the disk interface by default to "none". Config disks with the "none" disk interface will automatically use the same disk interface as the first hard disk (HDA). But for already existing nodes/template you have to pay attention.

Config ZIP is not updated while Node is running#

This config disk feature uses the Mtools program to access the config disk. Therefore, it needs to be installed on the Linux GNS3 server. The gns3-server package for Ubuntu has added mtools as a requirement, so it will be automatically installed in the GNS3VM and other Ubuntu systems. Different Linux flavors need to additionally install mtools.

Some VM types, like ASAv, support only the main disk image. The config disk will therefore not be visible on these VMs.

IOSv and IOSvL2 images have an odd way to name the flash drives. 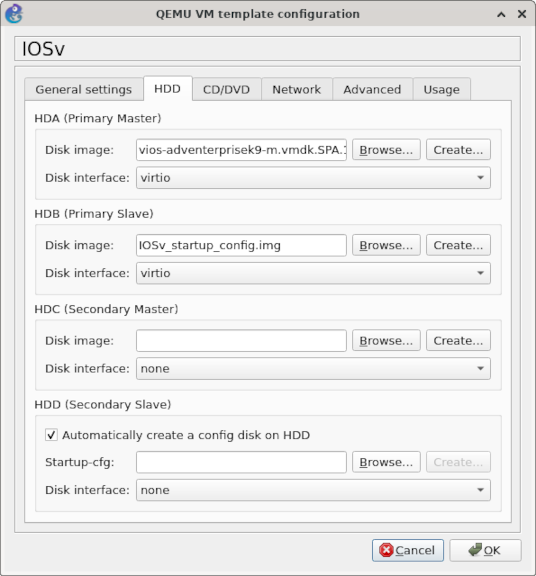 With the archive feature of IOS the configs can be automatically saved to the config disk. So you don't have to manually copy them. That has the additional benefit, that the user gets a backup of his configurations.

Add the following to the IOS configuration:

The path has to be adopted to the IOS disk name used for the config disk, see the previous section.

By default, it will create a maximum of 10 backups, but that can be changed with the maximum subcommand.

However, this image is difficult to modify. An alternative is to add this ios_config.txt to the config disk. All we have to do is to create this file, put its MD5 sum into ios_config_checksum and create a zip file containing them. Well, there is one quirk. The checksum file should contain only the 32 characters of the MD5 sum and an optional linefeed.

As an example here the config ZIP file I'm using for IOSv and IOSvL2: IOSv_startup_image.zip

I have added it as a config disk "Startup-cfg", so it's automatically added to all new IOSv VMs. This replaces the old HDB IOSv_startup_image.img, which should be cleared from the template. 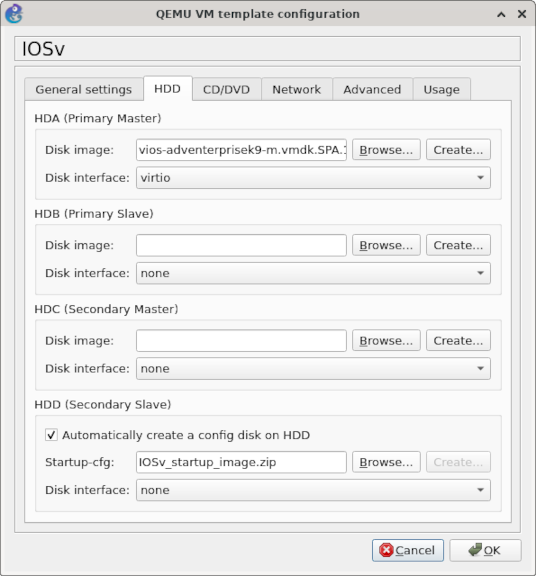